Your steps to master the English language

English Language Courses:  You will learn English easily with our interactive system that covers the four skills:
Reading and Writing – Listening and Speaking
In addition to learning with our qualified native teachers who have certificates of specialized in learning the English language.

A New Language is a New World

The first language center in Jordan with large space and facilities

Partners with many universities to obtain admissions

Established in 1970 with a modern educational environment

Spacious and comfortable halls that suit the modern education atmosphere

Accredited by the Ministry of Education and the University of Michigan, USA

What you should know about the English language?

It is the only language in the five continents besides French. English (English: English), a Germanic language that originated in England. It is the third most widespread mother tongue in the world (402 million people according to the 2002 census), in addition to its great spread in the world due to economic, cultural, scientific and political influences.

The English language has become widespread and noticeable in the Arab world, especially the Arabian Gulf, due to the development of life in general and tourism in particular, and has witnessed a qualitative leap in recent times and because of the pilgrims and the difference in their languages, it is easier to deal with them in English.

The Modern Language Center holds morning and evening courses to suit all tastes, and it is suitable for anyone who wants to study in English or work there or even obtain a residence and live in a foreign city, so the center provides a language partner during the course to practice the language
The duration of each course is 4 weeks, with 42 hours of study.

His Excellency the former Minister of Education, Dr. Fayez Al-Saudi

Signing a partnership agreement with the Talal Abu-Ghazaleh Organization 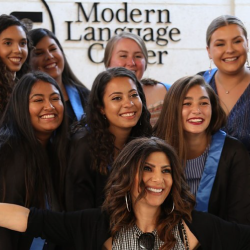